Beihai Park, also known as Winter Palace, is one of the most charming places in the city. First built in the 11th century the park covers 69 hectares with a large lake, which the park gets its name from.

A special part of the city

The beauty of the buildings within Beihai Park combines perfectly with the green landscape and the lake, where you can take a boat ride, adds a unique highlight to the visit.

Beihai Park is the perfect place to rest after hiking around Jingshan Park. 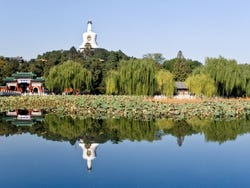 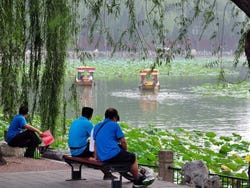 Resting at the lake in Beihai Park
2See photo gallery

North of the Forbidden City, by Jingshan Park.