The great growth of the airport began when Beijing was chosen to host the 2008 Olympic Games. Terminal 3, the second largest in the world behind T3 at Dubai Airport, was completed shortly before the Olympics.

The interior of the new terminal, designed by Norman Foster, is quite reminiscent of Terminal 4 at Barajas Airport. Its surface area is approximately double that of the Madrid airport.

How to get to Beijing from the airport

The most comfortable and fastest option. By hiring a transfer service a driver will be waiting for you at the airport holding a sign with your name and will take you to the hotel in the shortest time possible, avoiding hidden costs, possible scams and language problems.

The price of the service is around € 35 (US$ 35.60) per vehicle and can be booked here. Another advantage is that you can pay in euros, dollars or yuans.

The price of a taxi from Beijing airport to the city centre is between 80 and 100 yuan, a really cheap price considering the distance to the airport. It's a comfortable and quick way to get to the hotel.

The Airport Express train connects the airport terminals 2 and 3 with the Dongzhimen subway station, located on the street of the same name. It also makes an intermediate stop at Sanyuanqiao, Line 10 subway station. 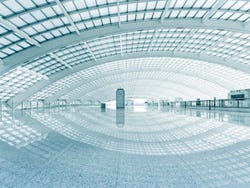 Getting to Beijing Transport