Chinese dishes are tasty and spiced, usually mixing the sweetest flavours with sour, salty and spicy ones.

One of the basic components of common Chinese meals is rice, which is usually served with all kinds of vegetables, meat and fish. The long periods of famine that have plagued the country throughout history have influenced the fact that all parts of the animal (cartilage, claws, entrails, heads) can be used when preparing the traditional dishes.

Among the most typical Chinese dishes, the following are worth mentioning:

Insects, larvae and other delicacies

If you want to try the more curious delicacies of Beijing's cuisine, we recommend going to Wangfujing Street Market. Here you can try scorpions, spiders, centipedes, sea horses and other beauties.

Curiously, these "dishes" are only found in this market and it is one of its main tourist attractions. The truth is that very few restaurants in the city have these "delicacies" and they are not very common dishes among the local people.

In China, there are countless types of tea, liquors, beers and locally produced wines. The latter is still not very popular, but more and more restaurants are including them in their menus.

Tea is a drink that originated in ancient China and you'll now find many varieties of the popular hot drink. Used as a medicinal drink to promote both physical and mental health for over five millennia, in ancient China tea was very expensive and only accessible to high society. Today, a large part of the population drinks it regularly.

During a Chinese meal, each person has their own bowl of rice and the rest of the dishes are placed in the centre to be shared among all.

In Chinese most people use chopsticks when eating, so most dishes are served in bite-size portions. But you might find people chopping up a whole fish or chicken with their chopsticks. Chopsticks were invented in China long before forks were invented in Europe, and the philosopher Confucious considered knives and forks to be weapons as opposed to eating tools.

Traditional spoons with flat bottoms are used for soups. If you have difficulty eating with chopsticks, you can always ask for a knife and fork.

In Beijing, you'll find fast-food chains and restaurants open 24 hours a day, so you won't go hungry. However, there are quite a few traditional restaurants that close their kitchens at 9 pm.

It's possible to find restaurants anywhere in the city, but it's not as easy as locating a KFC or a McDonalds, as they're spread throughout the city within a short walking distance of each other.

Some of the most recommended areas for eating are around the Wangfujing Street Market and Dongzhimen Inner Street, where you can find dozens of restaurants. 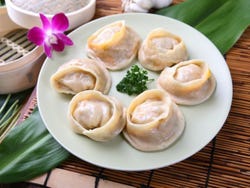 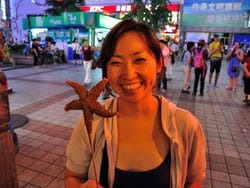 Taste a starfish at Wangfujing 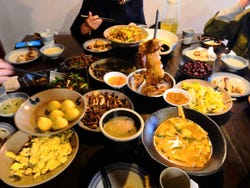 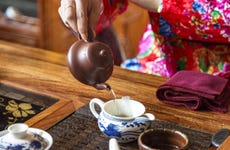 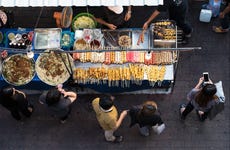