Beijing's taxis are a fast and inexpensive way to get around the city for very little money.

Taxis in Beijing are cheap but as distances can be long, the total amount can be more than expected. The approximate fares are the following:

The majority of taxi drivers are trustworthy, but there is always an exception to be careful of. In the more touristy areas, you might come across taxi drivers who ask for your destination and set a fixed price that is much higher than the journey would cost. We recommend avoiding these taxi drivers.

As for illegal taxis, there aren't many in Beijing, and they're mainly at the airport. To avoid them you just have to go to the normal taxi queue and take one there. They're clearly marked.

It's also important to take a business card from the hotel as soon as you arrive. They'll indicate the address in Chinese and the telephone number.

When it rains the taxis "disappear" and it might be hard to find a free one. If you have to go to the airport or another important place, plan it in advance. 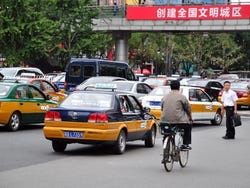