Construction began in 1694 during the Qing dynasty. Later it became the residence for Prince Yongzhen, and in 1744 the Lama Temple became an important monastery for Tibetan Buddist monks. Today, the monastery is the spiritual refuge for a group of Mongolian monks dedicated to the study of astronomy and medicine.

The Lama Temple is an attractive complex formed by several traditional buildings with golden roofs. In the courtyards, you'll find huge incense burners where rods that produce a strong smell are placed by religious followers.

One of the largest buildings, the Falun Dian, houses a six-metre bronze statue of Tsongkapa, the founder of the Yellow Bonnet Sect.

The largest of the central buildings, the Wanfu Ge Pavilion, houses the most valuable possession, an impressive statue of Maitreya, the future Buddha. The sculpture, which stands at 18 metres high, was carved from a single piece of sandalwood.

As one of the most important places of religious worship in Beijing, the Lama Temple is a must-see. The sight of the impressive Buddha sculptures while the smoke and smell of incense envelopes the golden pavilions. 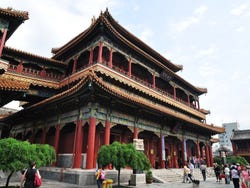 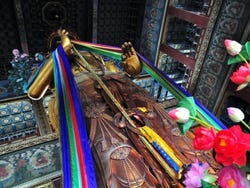 Statue of the future Buddha at Lama Temple 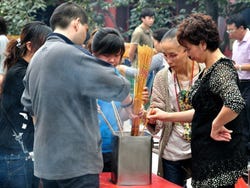 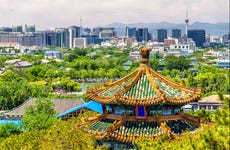